On mixing plaintext and encrypted messages

Several security-focused messaging apps give users the ability to choose between two modes: unencrypted chats, or end-to-end encrypted ones that might lack certain features. This is an anti-pattern when it comes to usable security, and it brings some risks that are rarely discussed.

There are several different implementations of this mixing and matching of secure and insecure communications. Some chat apps default to unencrypted messages, but allow users to manually enable end-to-end encryption for certain threads. Others automatically start a secure channel if the recipient’s client supports the right features – a type of opportunistic encryption. Examples of the former include Telegram and Facebook Messenger: users must explicitly start a “secret chat” if they want end-to-end encryption. In the other category, you have apps like Delta Chat – an email-based instant messenger that uses Autocrypt to automate PGP key distribution and message encryption. Even Signal, which is generally celebrated for its strong security, can be used as the default SMS app on Android phones – allowing it to send plaintext text messages to contacts who don’t use Signal. “Secure” email providers like ProtonMail also fall into this category.

This probably doesn’t sound so bad. After all, encrypting some messages is better than encrypting none, and users who have high security needs can just enable the encryption features they want, right? Unfortunately, this does not accurately represent how users understand and use secure communication tools.

The core problem is that communicating security features to end users is hard. There are often nuances and conditions that are opaque unless you’re a technical user with significant security knowledge. For example: in Delta Chat, messages are only encrypted if the recipient also uses a client with Autocrypt, and messages are never encrypted before you’ve received a response (with the other party’s public key as a header). It’s not easy to inform users of these conditions, and the communication difficulties are not unique to Delta Chat: PGP without Autocrypt is famously opaque and difficult to use1 and key verification in modern messaging apps is often done incorrectly because users do not understand it2.

An obvious solution is to use indicators. Many apps use passive indicators that don’t impede the users’ actions, but they let them know that some security feature is present or missing. The most common passive indicator is perhaps the lock icon in a browser toolbar indicating a HTTPS connection. However, studies show that thile users do look at passive indicators3, they are rarely heeded and do not change user behaviour4.

In Delta Chat, encrypted messages have a passive indicator in the form of a small lock icon, but unless you’re looking out for it, you won’t notice anything unusual about plaintext messages: 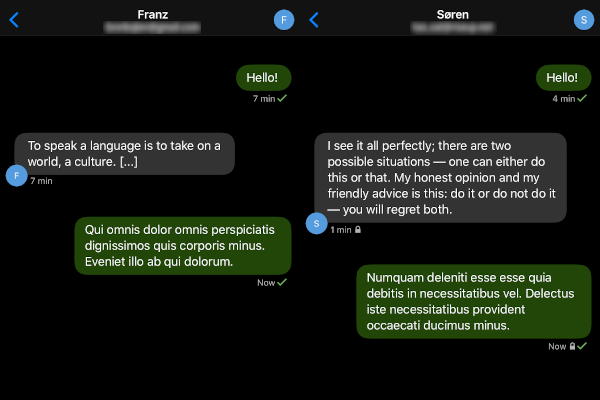 If your friend just told you to download a new, secure communication tool, you won’t know that you have to look out for the lock icon or that you must enable a specific security feature in the settings. The app might try to tell you these things, but anyone who’s ever seen people rapidly click through alerts to get to their goal knows that we can’t rely on people reading these in detail. At this point, some might object that it isn’t the app developers’ fault if users misrepresent its security features. This is true, but when we start implementing things like end-to-end encryption, we should expect this to happen and make sure that the app doesn’t let users shoot themselves in the foot in terms of security.

High-risk users need their communications to be encrypted reliably, and expecting people to manually verify security features is unfortunately not very realistic. Telegram is a good example. It markets itself as a secure and private messenger, but defaults to using plaintext chats. In a usability study of Telegram, researchers found that while users felt they were using a secure tool, they were rarely (if ever) using secret chats. Most users did not understand the difference between the default chat mode and secret chats, and less than half used secret chats when asked to send sensitive information5.

All messengers that mix insecure and secure modes face the same problem. Their security relies on users understanding quite a few things, for example that a key exchange must happen over the initial messages (Delta Chat), or that messages will only be encrypted if the recipient uses a compatible client (Signal). Based on what we know from the field of usable security, we cannot expect end users to keep these security gotchas in mind. As developers, we should operate under the assumption that any such gotchas will be misunderstood or forgotten by a significant number of users.

In 2017, The Guardian published an alarmist article claiming that WhatApp’s encryption had a backdoor. This was not true – their article was really about a reasonable tradeoff made by WhatsApp’s developers to balance security with usability for its two billion users. Their article was quickly met with an outcry from security professionals. These experts pointed out that The Guardian’s flawed reporting had caused WhatsApp to be considered unsafe among some activists and journalists who were instead switching to far less secure alternatives like SMS. The lesson to be learned is that when developing messaging apps, we should strive for security that fits a straightforward mental model: secure or not secure. Of course there are nuances around threat models, but we must have a reasonable security baseline – which it is impossible to provide if your app falls back to sending unencrypted messages.

There is also non-academic evidence that these are real risks. You’ll find posts from users complaining that they unknowingly sent plaintext messages in Delta Chat and Signal. Others point out that email subject lines may leak the contents of otherwise encrypted messages6. A recent article on Delta Chat in a German magazine noted that “of course, all messages are encrypted” before showing a screenshot of an unencrypted chat.

I’m all for raising the overall level of end-to-end encrypted communications on the internet, but we need to make sure that we recommend tools that are appropriate to users’ threat models, and that work for non-technical users. Opportunistic and optional encryption are useful for mitigating mass surveillance, but high-risk users must be confident that they won’t inadvertently send confidential information over an insecure channel. Opportunistic and optional encryption cannot provide this guarantee.